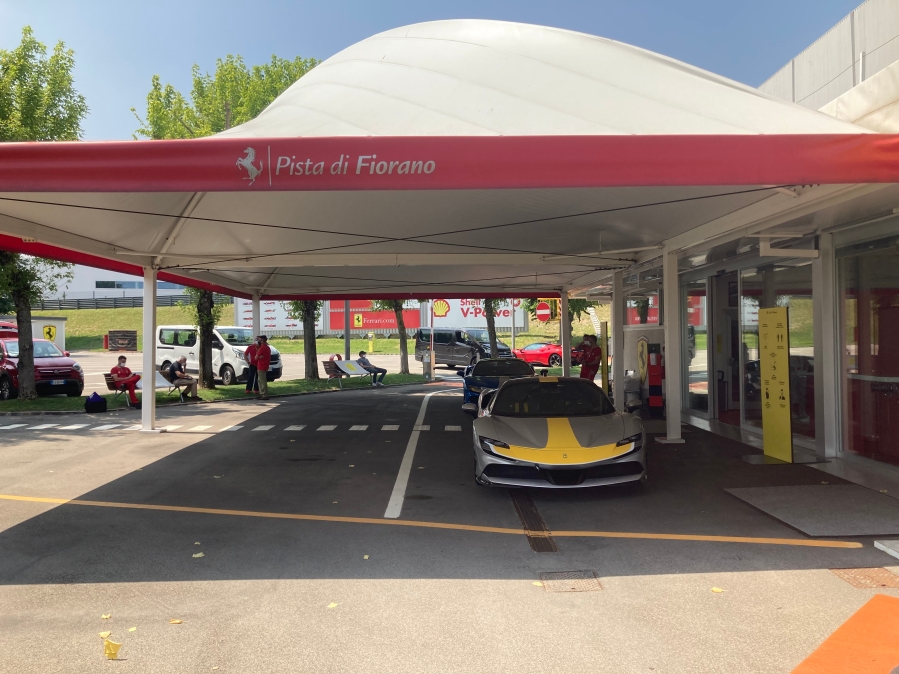 If paradise on Earth does not exist, a small Emilia-Romagna village located a few miles from Modena might come very close to it. There’s a hidden track located in Fiorano… where the greatest drivers have driven and tested all the best tricks from the Prancing Horse brand. Driving briefly the SF90 there was a dream come true for yours 48 years old truly.

I won’t tell you my life story but back when I was born, in 1972, my father had just started a collection of hand- built model cars. At the time, compared to what is available now, these metal models were not the best replicas, obviously. Dad selected Ferrari for his collection, hoping that, one day, he would own all the brand’s cars as 1:43 scale models. He was far from knowing the rich and tortuous Ferrari story… and the fact there were countless variants of the same model. However, that was enough to fuel my passion for cars when he lined up his collection in front of me…

During past Italian holydays, I had been to Maranello a few times. However, I must admit I never found the museum attractive. When Michael Schumacher joined the F1 team, it became a money-spinning thing. Once, I managed to climb onto the roof of a car park to see the Fiorano track in the distance. Back in July 2021, a press trip took me straight to the Commendatore’s mansion. Getting through the gates is restricted to the people with the right credentials. Once inside, there’s a new building that catches my eye (see below) on the left. Then, it is right under the track to reach the famous white house with the red shutters. It is located right in the domain centre.

That is exactly where the new, sports models are photographed. I was in the mood right away. On that occasion, the SF90 was sitting on top of the Piazza Schumacher. The car was definitely impressive but I could still feel the weight of the legacy and history that haunts this sun-drenched place. I opened my eyes wide and tried to capture the smallest details, the tiniest details of the brand’s glorious past. A few steps away, we discovered the Fiorano track and… we could nearly hear the Flat-12 song of the 312 B2 driven by Jacky Ickx in 1973, one year after this test track had become a reality.

Unfortunately, reality called us back in English : there was a rather busy programme ahead of us. The day was a mix of workshops interspersed with sessions behind the wheel of the SF90 Assetto Fiorano. The first stop took us inside the building on the left of the famous square. We were given a detailed technical description of the car, we could admire the twin-turbo V8 engine and the technical infrastructure of a car cut in half. We could see the batteries located between the cabin and the rear engine as well as the 8-speed dual-clutch gearbox.

Then, the designers invited us to join them in a very modern pavilion located in the middle of the track. They are genuine enthusiasts! They told us about the technical subtleties that went into the design of this car, more specifically the air flow paths and mechanisms that are all but invisible to the eyes of the average onlooker. Needless to say, I would have listened to them for hours…

Soon, it was time to get behind the wheel of the most powerful road-going Ferrari ever built. Just before that, I made it to the pits of the Fiorano track. I was expecting to see Jean Alesi in a racing suit explaining which settings he wanted for the F642.

Fabrizio Toschi, the factory SF90 Assetto Fiorano test driver, explained me the track’s subtleties. He would also be my leader for the few track laps I am allowed. My heart sinks as I enter the track… I concentrate on the job I have been given for the Moniteur Automobile magazine. My feelings and emotions away, I concentrated on driving lines as well as delaying braking to the very last second. You can read the test of this ballistic missile on my colleagues’ website. Let me continue with this unforgettable day in the heart of tifosi land.

At noon, the press team did not take us to a well-known historic restaurant :  it was being renovated. This made me fear the worst for its authenticity, as many historic factory buildings have already been replaced by ultra-modern structures. Fortunately, there are still some typical places a few kilometres away from Maranello. Ristorante Montana is one of them.

We were warmly welcomed by the whole Montana family. It’s impossible not to be thrilled inside, once surrounded by numerous souvenirs : helmets that belonged to the greatest drivers, old or newer racing suits, even Italian football players’ shirts, you name it. Not to mention numerous photos of the restaurant owner surrounded by Ferrari drivers or various personalities that ate here. A few tables away from us, none other than Carlos Sainz Jr, this season Scuderia driver, was having lunch with his girlfriend.

In the afternoon, I was due to drive the SF90 again but we w;ere also invited to discover the new private racer support and customer service dedicated building. The very same one that had caught my eye when we entered the Fiorano site. It’s just like a vault full of toys : a pampered FXX-K Evo line up sits there, just select your favorite color. There were some 599XXs too, as well as the very first Enzo- based FXX.

All these silent cars just sit there, waiting for the next meetings organised by the customer service department. They travel to tracks all over the world, their affluent owners arriving onboard private jets to drive a few laps under the guidance of in-house instructors. Considering the number of cars stored, Ferrari must make as much money from these activities as it does selling roadcars. More is to come…

Upstairs, another impressive bunch of Ferraris was waiting for us. These were mainly Formula One cars from all eras with a majority dating back to the 90s and 2000s. These old single-seaters belong to private customers who can’t exhibit them in their own homes. Ferrari stores and maintains them in a beautiful workshop located underneath the building. Unfortunately, we didn’t get access to it but I managed to identify about ten bays from above. As you can imagine, that day spent in Fiorano was really a unique moment.

It even ended with a little surprise… We were taken to a small room and asked  to put our smartphones into sealed bags. Then, we could get into the Maranello factory. I opened my eyes wide again… everything was well camouflaged and the few models we saw did not give us any hint of the future. We were taken to the building where new cars are delivered to their owners and were greeted by a 812 Competizione model in the entrance hall. It was surrounded by various samples used to help owners making their cars truly unique. Upstairs, we discovered a model of the small 296 GTB that would be revealed to the world a few days later. Unfortunately, we were not allowed to take pictures of it neither of its engine, even though it was just a model. This was a sort of senseless gift, especially as we couldn’t get any specific information about the real car…

Obviously not the gift I was expecting… in fact I didn’t bring anything back with me from Maranello, apart from a few pics and videos of my track laps. However, I must admit that this day will remain deeply engraved in my memory forever. It will definitely take something very exciting to get me so thrilled again in the future. I would like to thank Xavier Daffe, Le Moniteur Automobile Editor who made this trip possible. As a new year looms, I invite you to never stop dreaming as you never know what the future will bring to you! (Translation: Dimitri Urbain)