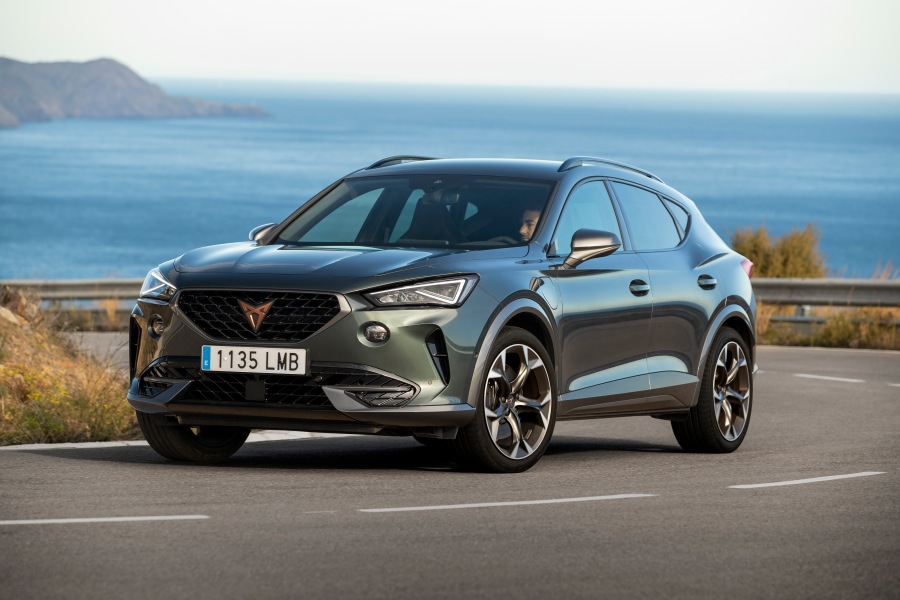 Launched in 2020, the Formentor was the first model developed specifically for the newly created Cupra brand. We tested it with the smallest engine available : the 1.5 TSi 4-cylinder with 150 hp, mated to the inevitable 7-speed DSG gearbox. It’s hard to get excited about its sporty character but that doesn’t make it uninteresting.

The Cupra Formentor’s taut, rugged lines are really eye-catching and we noticed quite a few puzzled people during our test. Cars wearing the young Spanish brand emblem are not commonplace! Its aggressive front bumper, featuring ventilation holes and aerodynamic slats, gives it a serious appearance and its undulating body flanks are highlighted by the grey underbody and wheel arches. Its angular rear face sets it apart as well. The Ford Puma comes first to mind as a main competitor, although fans of expensive German cars would also mention the BMW X2 and the Audi Q3 Sportback, those two being less dynamic in our view. Inside, the latest VW Group products interior design is clear on the screens, while the dashboard, identical to that of the Seat Leon, tries to enhance perceived quality with leather stitching on the top. Orange touches on the steering wheel and the air vents brighten up the whole interior. The driving position is not too high if you choose the lowest seat setting. However, very quickly you miss the good old buttons replaced by touch controls on the screen. The steering wheel is nice to handle.

The Formentor’s road behaviour is firm but not overly so, even though it is only equipped with passive damping. It can be driven like a big go-kart; bodyroll won’t be a problem. It’s quite pleasant when the road is dry and the alacrity of the 150hp four-cylinder petrol engine allows you to overtake in complete safety. Despite the rather incisive steering, the Formentor lacks the agility of a Ford Puma and, however smooth, its DSG dual-clutch gearbox proves to be either too slow (Comfort mode) or too fast (Sport). A little more power would be most welcome to make the most of a well-designed chassis and a pleasure- minded road holding that should bring a lot of pleasure to driving enthusiasts.

The Cupra Formentor is not tiring on long journeys, thanks to a fairly good soundproofing as well as a high comfort level, even if the firmness of the rear seat is unmistakable. Being as big as a 3008 (4.45 m), the Formentor interior space is generous, especially in the back. Even if the boot capacity may seem disappointing (290 l under the parcel shelf) it features a folding floor and pull tabs that make it easy to move the back seat upper parts. All)round visibility is quite good and the assistance of various sensors is really welcome when parking the car.

The Formentor is another car that went the full digital way, which is a shame. Admittedly, my teenage daughter can find her way around the various menus in less time than it takes to write this, and her fingers seem magical next to mine, which are wading miserably through the central screen… however, this Cupra Formentor is not intended for 17 years old buyers! If only the current semiconductor shortage could lead some car makers to take a step back and use good old-fashioned buttons again on their dashboards…

Why I buy it

Without revolutionizing the sporty and dynamic crossover market, the Cupra Formentor nonetheless adds a certain amount of freshness and originality. Its lines are quite harmonious and the number of admiring glances we got are enough to understand that its design is spot on. Its attractiveness also comes from its rarity. This “basic” version is endowed with a few decisive qualities, the first one being its reasonable RRP starting from € 32,760. Its comfort is surprisingly good for such a dynamic and sporty SUV.

Why I don’t buy it

For buyers who want a slightly exclusive car without splasking too much money, the Cupra Formentor 1.5 TSi is ideal. However, you’ll have to live with strange and unnatural ergonomics (everything is actuated through the touchscreen) and its on-road behaviour hesitates too much between dynamism and comfort. True, one will soon want more power to take advantage of the excellent chassis but you will get more than decent comfort as well as reasonable consumption figures if, unlike yours truly (I averaged 8.7 l/100 km), you don’t constantly rev and trash the engine. Last but not least, the copper touches that set apart the Cupra models are an acquired taste. (Translation: Dimitri Urbain)