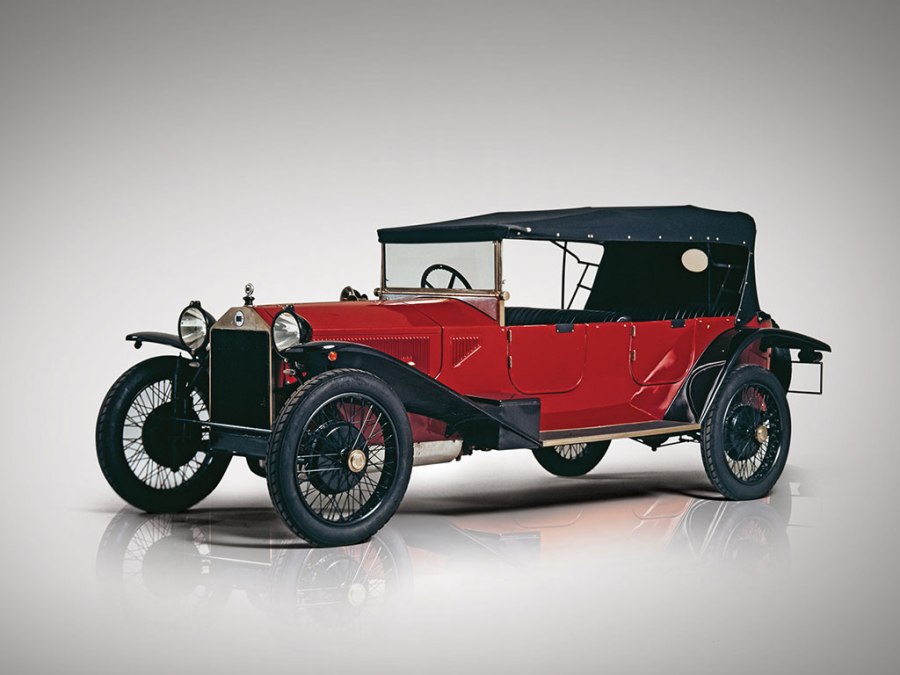 One hundred years ago, the modern automobile was born. The Lancia Lambda was the first car to have a self-supporting body, independent suspension as well as an avant-garde V6 engine. The name of the Turin-based manufacturer rhymes with technical prowess… (Text: Dimitri Urbain)

On September 1, 1921, Vincenzo Lancia, accompanied by Luigi Gismondi, his regular test driver, took the wheel of the first Lambda prototype. They carried out tests between Turin and the Mont Cenis pass. It was the culmination of ideas that had been put down on paper in 1918 and had been patented in March 1919. This « new model of automobile » used a central pressed steel beam as a chassis.  It is associated with a self-supporting body, a first for the industry. The torpedo body was much lower than anything else available at the time because the drive shaft, which connected the engine and gearbox, located at the front, to the rear axle, was housed in a tunnel inside the car rather than under it.

This Lancia was obviously much more aerodynamic than anything else available at the time and its lowered centre of gravity ensured excellent road holding. Having already travelled several times to the United States, Lancia was inspired by a transatlantic ship for its new project. The bench seats were replaced by individual seats for the four passengers. At the front, the suspension was an independent set up, another first. This innovation work was Battista Falcheto’s, one of Vincenzo Lancia’s closest collaborators. The breakage of a leaf spring on his own car led Lancia to innovate in order to avoid such problems. It must be said that back then, Italian roads were more like dirt roads than motorways!

The rigid axle, then universally used, induced an opposite wheel movement at each bounce, which was far from comfortable and, above all, could very quickly prove to be dangerous. Admittedly, the speeds of the time were not yet very high, but accidents were numerous. Once the task had been assigned to him, Falchetto had quickly returned from his drawing board with more than ten independent suspension proposals. Moreover, Lancia wanted his new car to have a dynamic behaviour and to be ahead of its competitors. For this reason, the Lambda also received a brand new 13°6″ V-twin 2100 cm3 – 49 bhp at 3250 rpm engine. It also benefited from an overhead camshaft! Taking up less space in length, it freed up more space for the passengers. This is another feature that was ahead of its time: maximum space for the occupants to increase their comfort. A concern that would not be met by other manufacturers until many decades later!

The gearbox is a three-speeder. Complementing the front independent suspension, a rigid axle suspended by semi-elliptical longitudinal springs was used at the rear. The brakes were mechanical on all four wheels. The weight was just over 1,200 kg and top speed a good 110 km/h.  It should also be noted that the electrical circuit was already a 12 V one! Another major originality : the boot was an integral part of the car’s structure and no longer an attached trunk, a practice that was then widespread. From then on, the front apron and the partition separating the passenger compartment from the boot transversely reinforced the structure and increased the rigidity of the body, mirroring closely what was a common practice building ships’ hulls.

Falchetto proposed Lancia to fit the car with front brakes. At that time, brakes were only used on rear wheels. His reasoning was logical: if the independent suspension and improved aerodynamics allowed for higher performance, it was also important to be able to stop the car in the best possible conditions. The development process was long and difficult, but the car was finally ready in 1922. It was then one of the stars of the Paris and London shows. Production began a few months later, in 1923.

Lancia was a perfectionist and constantly improved his own cars… The Lambda remained in production for nine years and there were as many versions! The first series lasted only five months, its production ending in November 1923. It was available both as a torpedo and a convertible saloon. Another major difference with the then current trend, the Lambda didn’t use a separate chassis. It restricted the creativity of independent coachbuilders. The second series, introduced at the end of 1923 benefited from detail improvements and remained in production for a mere six months period.

From the start, the Lambda was a great success : many stars and important people of the time bought one. The brand’s most famous customer was Greta Garbo. The third series introduced in May 1924 used new cast iron pistons that were more resistant than the aluminium ones used until then. A few months later, in November, the fourth series arrived, with revised engine block and cylinder head. The fifth series, produced between March 1925 and September 1926, introduced improved braking, revised suspension and a four-speed gearbox. Its top speed improved and reached 115 km/h.

More than a thousand units were produced between September 1925 and July 1926, along with the mk6 version. This one had a lengthened wheelbase (3.42 m instead of 3.10 m), which made it possible to create a six-seater version… and was somehow a forerunner of the future MPVs! In addition, the V of the engine was slightly reduced (from 13°6 to 13°) while braking was improved through the fitting of larger drums.  The seventh series got a displacement increase, from 2,121 to 2,375 cm3. Power output jumped by 10 hp, from 49 to 59.4. The eighth series soon featured a new 2,569 cc engine producing 69 hp.

The ninth and final series, represented all that Lancia did best: performance, comfort, reliability and avant-garde solutions at the service of progress and a wealthy clientele. In the end, 13,000 cars were produced until 1931, proving the Lambda was technically above its competitors when it had been launched in the early 1920s!

With its superior road holding, handling and technical innovations, the Lambda quickly became an ideal competition car. During the 1920s, open road racing was a favourite field. The Mille Miglia was a favourite race where it finished fourth and fifth in 1927, even winning the 3-litre class in the process.

The following year, the factory prepared a few racing cars with almost 80 HP engines and using short wheelbase torpedo and spider bodies made by Casaro in Turin. Gismondi’s car was second for a long time but unfortunately had to give up. However, another Lambda finished third and first again in the 3-litre category. A Lambda finished fourth in the 1929 Mille Miglia. This was one of the car’s last sporting achievements.